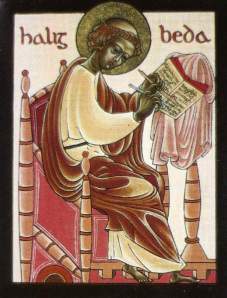 Educated at Jarrow from age 7, he became a monk, priest and scholar there. He rarely travelled, but was widely known through his writings. In his day it was his scripture commentaries that he was famed for, but his history of the English church and people has been his enduring legacy, and with it the pictures of Aidan, Cuthbert and others that are so important for us. His irritating disapproval of the Celtic practices overturned at the Whitby Synod is balanced by his admiration of the holy lives of the Irish missionaries from Iona. He died, singing ‘Glory be to the Father and to the Son and to the Holy Ghost’, after finishing his work on a vernacular translation of John’s gospel. A devoted gathering of the community surrounded him as his long life came to its end.

Teach us, our Lord, to honour You in our work, in our attitudes, in our studies and in our devotions. Like Bede, may we, at the end, be able to sing, ‘Glory to the Father, Son and Holy Spirit.’ Amen.