Story of the Community

The Origins of the Northumbria Community

“Only be careful, and watch yourselves closely so that you do not forget the things your eyes have seen or let them slip from your heart as long as you live. Teach them to your children and to their children after them.” Deuteronomy 4:9

We are a dispersed Christian Community scattered across the world yet united in our commitment to a daily rhythm of prayer and a common Rule of Life in saying Yes to Availability to God and others and Yes to intentional Vulnerability before God and others. Shaped on the anvil of cultural change, with more questions than answers, the Community’s origins can be traced to 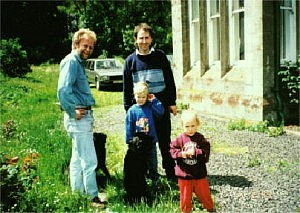 relationships formed in the late 1970’s and early 1980’s initially with John and Linda Skinner and Andy Raine in North Northumberland. Here God planted the seeds of vision and vocation in their hearts that bore fruit in the ideas, images, metaphors and concepts that were foundational to the ethos and spirituality of what was to become the Northumbria Community. These were often birthed and grown in the context of an Annual Easter workshop where relationship and teaching were explored. The workshops were to be “small schools of creativity… a place for sharing vision… a time of sharing and joining together as one”. This pattern (begun in 1980) has become an annual high point, underlined by the renewal of Community vows on Holy Island on Easter Sunday.

In the mid 1980’s the Nether Springs Trust was formed to release John into a ministry of spiritual direction in the context of a contemplative calling. In 1989 an apostolic group called Northumbria Ministries, committed to mission in the ancient kingdom of Northumbria, led by Roy Searle, met with the group that represented Nether Springs and explored a coming together as one. It soon became clear that a union of the two was in the purpose of God and this merger led in 1990 to “The Nether Springs Trust, Home of Northumbria Ministries”, a prelude to what would later be named the Northumbria Community. As these founders pioneered and explored, a Community emerged around them, unplanned, spontaneous. Foundational questions, like those asked in exile, ‘Who is it that you seek?’, ‘How then shall we live?’ and ‘How shall we sing the Lord’s song in a strange land?’, began to shape the thinking and understanding of God’s call on our lives alone and together.

In discovering the history and heritage of Celtic Northumbria; the strong links to the saints and scholars of Ireland, the wisdom tradition of the Desert Fathers, the ‘mixed life’ of the Franciscans, there was a blending of cell and coracle, of monastery and mission, from which the language and ethos of the Community was born and is still sustained. These core vocational values were to become a means of handing on the tradition now being formed.

The emphasis upon the cell (the contemplative place of prayer and solitude, of withdrawal and being alone before God) and the image of the coracle (with its emphasis upon the apostolic, the missional, the going out and engaging and serving the world) are key elements within the Community’s life and work.

As early pioneers in the ‘new monastic’ movement, the Community has intentionally explored the meaning of Dietrich Bonhoeffer’s prophetic words: “The renewal of the church will come from a new type of monasticism, which only has in common with the old an uncompromising allegiance to the Sermon on the Mount. It is high time people banded together to do this.”