“This gift to us of a new Mother House is an amazing thing, but it will need our collective commitment as a Community to make it a place of blessing for others.” 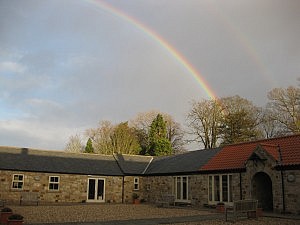 As 2011 began the buildings that had so recently been a building site soon became a place of welcome and home as many Companions, Friends, and visitors crossed the threshold of Nether Springs at Acton Home Farm. It was a new place, and yet somehow very familiar, a real sense of continuity, with the same people, same ethos, same heart. The rhythm of the day unfolded to the ringing of the same bell, but its sound filled a different space in what was a new and exciting chapter in our Community’s life.

This new chapter provided the opportunity to review basics and revisit foundations. The Overseers Report stated: “What a year it has been! Twelve months on we have relocated very successfully, seen the emergence of three Other Community Houses, undertaken a significant piece of work in rewriting and revamping the Novitiate Process, as well as a complete Admin Review. We’ve experienced a season of steady growth in people entering the Novitiate with new Companions and Friends journeying with the Community. We’ve also concluded a chapter in the life of our Senior Leadership, seen the closure of our Trading Company, Trevor Miller stepping back in semi-retirement to a more consultative Overseeing role, the appointment of new staff and a greater missional expression of the Community’s life.”

Pete Askew as Overseer in Residence, exercised specific responsibility for the oversight of the Mother House, as well as directing and managing all aspects of the transition process.

Catherine Askew as Priest and Chaplain in Residence, guided the liturgical life of the Mother House, overseeing the programme of spiritual formation through retreats, mentoring, and training in the ‘new monasticism’ through the Novitiate process.

In 2012 a new matrix for the ‘senior leadership’ network was initiated. Jeff Sutheran carried responsibility for Communications, Judith Goodfellow for Resources, with Andy Foster managing Finance and Business Development.  Sarah Pillar continued to input into the life of the Community with her insight and presence being an invaluable part of the leadership team.

In 2012 a new ongoing process for our Easter Workshop was introduced, headed by Anita Haigh. This offered fresh themed resources to be used by individuals, groups and gatherings in an annual cycle of exploration, reflection and discernment for our scattered Community.

In July 2013 our new website went live and during this time we also saw a growing interest in the Community from across the world as we explored relationships with individuals and groups as far apart as Belfast and Brisbane, Toronto and Tokyo.

In March 2014 the new Chapel opened for use and quickly became a much-loved prayer space.

In July 2014, the Community changed its legal structure to become a Charitable Incorporated Organisation – a new way of being a charity developed by the Charity Commission in the UK that provided wider scope and improved safeguarding for Trustees.

In September 2015, after three years of writing, compiling and editing, coordinated by Judith Goodfellow, it was with a sense of relief and thankfulness that our new prayer book ‘Celtic Daily Prayer Book 2: Farther up and Farther In’ was published to much acclaim; an asset that both complements and adds to the riches of ‘Celtic Daily Prayer Book 1: The Journey Begins.’

What now? More of the same: always aware that ‘memories must not negate dreams, and dreams must not blot out memories’.

Memory as continuity is to honour and respect those who have gone before; the pioneers, leaders and the many unsung heroes who are all pieces of the jigsaw without which the story of any Community would be incomplete. Past, present, future is one unbroken web of life to a God who is eternal and who ‘has placed eternity in our hearts’. Psalm 102:18 ‘let this be written for a future generation, that a people not yet created may praise the Lord.