An article written by Trevor Miller for the New Dictionary of Theology.

If theology is the contemplation of God, then monastic theology is devoted to the inner life, practices and spiritual disciplines that nurture that contemplation. Put simply, the term ‘monastic theology’ refers not just to the local setting of the theologians but to the approach that they adopted. They worked in an atmosphere of commitment and devotion, within the framework of a way of life that has its focus not on externals but on seeking God (from Gk Monachos: alone, solitary). Their goal was not the pursuit of knowledge for its own sake, but edification and worship. Their approach was one of meditation and adoration. The theologian was not a detached academic observer studying his material from outside, but a committed, involved participant.

Monastics have been among the most productive spiritual and theological writers down the centuries, and at some periods, notably those up to the Middle Ages, the story of monastic spirituality is almost indistinguishable from that of theology in general. In later centuries, there arose another form of theology – scholastic theology. Theology came to be studied outside of the cloister – in the university and other ‘secular’ (non-monastic) settings. The goal was objective intellectual knowledge. The approach was one of questioning, logic, speculation and disputation as theology became a detached objective science. This approach did not eliminate the older monastic approach, but it was to displace it from the front line of theology. Bernard of Clairvaux (d.1153) is called ‘the last of the fathers’ although he does not end the list of those who have continued to contribute to monastic spirituality.

B. The age of monastic theology

Many great names dominate the age of monastic theology: Clement of Alexandria (d.199) and later Origen (d.253) developed the ideas on which monastic life and theology was founded. They interpreted the exodus from Egypt, the Sabbath rest and the life of John the Baptist in the desert as symbolizing the need of withdrawal from the desires of the world in order to fully seek and serve God.

In the Writings of Clement of Alexandria and especially of Origen all the essential elements of an ascetical theology may already be found. Henry Chadwick, The Early Church, p177

The life of Antony was written by Athanasius, (d.373) bishop of Alexandria, famous for the part he played in defending orthodoxy at the Council of Nicea. The biography of Antony of Egypt defined and propagated the monastic life to both East and West, not least in precipitating the conversion of Augustine of Hippo (d.430).

John Cassian (d.435), a monk in Bethlehem and Egypt produced a comprehensive monastic theology dependent largely on the teaching of Evagrius Ponticus (d.399) and their common inspiration, Origen. Having mastered both Greek and Latin he was in a unique position to facilitate monasticism in the West where he established monasteries in Gaul. 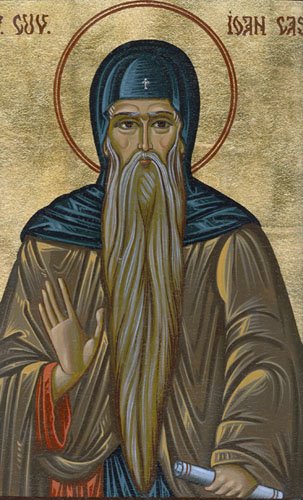 Cassian’s writings strongly influenced Benedict of Nursia (480-547), who recommends in his ‘rule’ that all monks read his Institutes and Conferences. Gregory the Great used Cassian’s teaching on compunction and prayer and built on his teaching about the active and contemplative paradox of monastic theology. Cassian is the only Latin author to be found in the ‘Sayings of the desert fathers’ (Apophthegmata) and the Greek Philokalia.

Both Cassian and Augustine remind us that the essence of monastic life lies with the aspiration and intention with which it is lived rather than in its structures or disciplines. They are nothing without a renunciation of the heart towards love. The monastic life has no meaning if it does not turn the soul towards God. The quest for purity of heart and the seeking of God alone in both the contemplative and practical aspects of life; all of which finds its fulfilment in heaven is a theme taken up by all writers on monastic theology and later popularised by the Trappist monk and writer, Thomas Merton (1915-68).

Monastic theology was lived, preached and written in the monastery and was above all a theology rooted in experience. Theologians are those who can write or talk about God with the authority of their own experience of God. The writings of Augustine were prized especially for their spiritual teaching and the mystical teaching of Gregory and Bernard are among the greatest achievements of monastic theology.

Fundamental themes of monastic theology include the concept of spiritual warfare which the monk is called to wage against evil spirits which threaten him on all sides. This conflict takes place in the heart and the struggle against evil thoughts, the need for vigilance, guarding the heart, and discernment of spirits is a daily battle. Honesty and confession to a spiritual Father is useful because even when beaten the discovery of our weakness through self-knowledge helps our humility. It also strengthens our virtue and brings the reward of being able to help others similarly afflicted.

Monastic theology was based primarily on Scripture which, together with the fathers, was read daily in the lectio divina (‘divine reading’). Although Scripture was central, the aim was not a literal, scientific exegesis. Nevertheless, monastic exegesis was disciplined with a strong emphasis on Scripture being interpreted by Scripture in handling the sacred text. Also of great importance was the allegorical interpretation of the Bible, with special emphasis on the Song of Solomon and the life of Moses, together with the Genesis account of the earlier patriarchs. This was because the monastic tradition regarded the individual soul as the bride of Christ, and interpreted Old Testament love poetry in this sense. The patriarchal period was attractive, because of its emphasis on desert life, which corresponded to the origins of monasticism.

In summary, monastic theology is that which is characteristic of the reflections and disciplines of those leading an ascetic life either in contemplative seclusion or following a common life in a monastery.

The scholastic endeavour is to a greater degree occasioned by the need for action in the Church: controversy, pastoral administration or again the solution of new questions. Monastic thought is less affected by the concerns of the moment: rather it is governed only by the enduring necessities of the search for God. Jean Leclercq, The Love of Learning and the Desire for God, pp.279-280

Mulling over the Questions
The Heart of Vocation

Get updates on events and much more with our free e-newsletter: